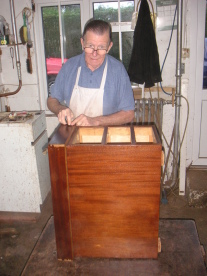 Jim Mundy served his 4 year French Polishing apprenticeship at the renowned High Wycombe furniture firm Nicholls & Jaynes, and continued to work there for a few years. He started in business on his own in 1958 as JW Mundy. His father had also been a French polisher in the Maidenhead area before him, so the name of Mundy and polishing in the Maidenhead area had already been linked together for two generations.

The work continued to come in from both private and trade customers, and advertising for work soon became history as his reputation grew, indeed, the company today still only needs recommendations to keep busy.

In 1984 Jim was joined in the firm by his son David, who had been around the  workshop since he could walk! The name was changed to JW Mundy & Son to let the world know about this development and so the third generation of Mundy was busy polishing in Maidenhead.

The type of work now undertaken has changed somewhat over the years, the early years were mainly spent just French Polishing, the actual furniture restoration side has increased in recent times, with the leather top trade increasing every year since we started doing it in 1986. However, French Polishing is still our first priority.

Jim, even in his eighties can still be found pottering around the workshop, beavering away, keeping his beady eye on things, making sure his lad's work is up to scratch, (still a youngster at just under 50 years of age, lot to learn), enjoying every minute of the familiar environment. If ever you would like to see a man who loves every minute of his job, then this is the man to see in action. Still working away, treating his customers as friends, and welcoming anyone into the workshop, always willing to give advice when asked, and after polishing for over 60 years, it should be the right advice!

We are still at the same premises in Maidenhead as when it all started in 1958. Things have changed a little bit, but not much, we still only use the traditional french polish, never using a spray finish as most polishers now use. Our aim is still to get the piece of furniture looking its best for you, listening to how you would like it to look, and acting accordingly. The main aim is customer satisfaction and service.